Some new evacuation systems are required to have two independent sound circuits in each evacuation zone. This improves the likelihood that evacuation messages will be heard during an emergency.

Fire can short out electrical cables. If this happens on an audible evacuation system, all the speakers connected to the shorted cable will be silenced. People in the affected zone will no longer hear evacuation messages.

If each evacuation zone has two independent sound circuits, a short on one cable will not silence warnings on the other cable. This ensures warning messages will still be heard throughout the zone.

That’s the idea behind the Pertronic Audio Distribution Module (ADM-2). This product provides duplicate audio circuits from a single evacuation amplifier. The module’s built-in monitoring system continuously monitors the audio output lines for open- or short-circuit faults, irrespective of whether the system is broadcasting an evacuation message, broadcasting non-urgent audio such as background music, or idling with no signal. If the monitoring system detects a fault on either circuit, it will disconnect both circuits, and then, within a couple of seconds, resume audio transmission on the undamaged circuit.

The Audio Distribution Module (ADM-2) delivers the benefits of duplicate audio circuits, without the high cost of duplicating the evacuation amplifier. 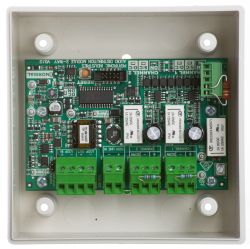