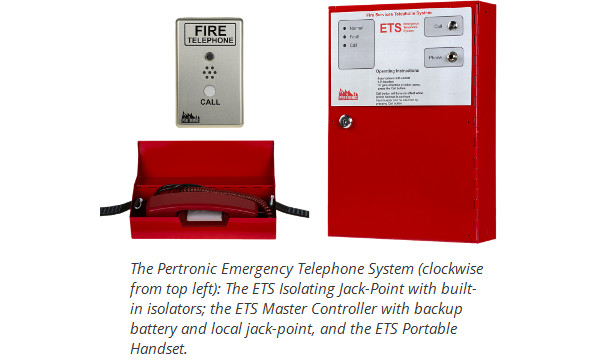 The Pertronic Emergency Telephone System (ETS) allows fire-fighters to communicate in facilities where hand-held two-way radios may not be dependable. Designed to the Melbourne MFB’s requirements,  the Pertronic ETS has a number of features that are essential for effective operation during an emergency.

The system provides party-line communication between portable telephone handsets plugged into jack-points, including the jack-point on the master controller.

The Pertronic ETS incorporates cable isolators in each jack-point, ensuring that the ETS will continue operating even with a short or open-circuit fault in its bi-directional loop cabling. Significant parts of the system will remain operational even if multiple segments have short-circuit faults.

This fault tolerant performance is due to the system’s architecture. The Pertronic ETS consists of multiple jack-points, and a master controller, connected in a bi-directional two-wire ring circuit.

The ETS cabling is continually supervised for faults. If the system detects a short-circuit fault between any two jack-points, the affected ring segment is disconnected and the system continues to operate over the unaffected cabling. If multiple ring segments have short-circuits, communication remains possible between all jack-points that are not isolated from the master controller.

The Pertronic ETS consists of an ETS Master Controller, with up to 100 ETS Isolating Jack-Points connected by a single twisted-pair cable. Up to ten portable ETS Handsets may be connected to the system at any one time.

Contact us for more information about the Pertronic Emergency Telephone System